Palam Kalyanasundaram the unsung hero in India is the Man of the Millennium.

“Everything is a state of mind. Finally, what do we take with us when we leave planet earth?”

He lives by this simple philosophy. A will to serve humanity has been 73-year-old Kalyanasundaram’s guiding principle throughout his life. A gold medalist in library science, he also holds a masters degree in literature and history. During his 35-year-long career at Kumarkurupara Arts College at Srivaikuntam, he diligently and willingly donated his salary month after month towards charity and did odd jobs to meet his daily needs. Even after retirement, he worked as a waiter in a hotel in exchange for two meals a day and a meagre salary so that he could continue to donate to orphanages and to children’s educational funds.

Once you get to talk to him, the fire and determination in him shines forth through his words. He speaks in a childlike manner, and his high-pitched voice which was once an embarrassment and almost made him commit suicide is something you tend to overlook. As you listen to him, you are awestruck at the yeoman service he has done for humanity.

He was awarded a sum of Rs. 30 crores as a part of his contributions towards the benefit of orphans by an American organization which conferred on him the title ‘Man of the Millennium’; however he gave the lump sum money in charity. The Union government acclaimed him as the best librarian in India. The International Biographical Centre, Cambridge, honored him as one of the ‘noblest of the world’ and the United Nations adjudged him as one of the most outstanding people of the 20th century. He also received Man of the Millennium award and Life Time of Service Award from Rotary Club of India in 2011. 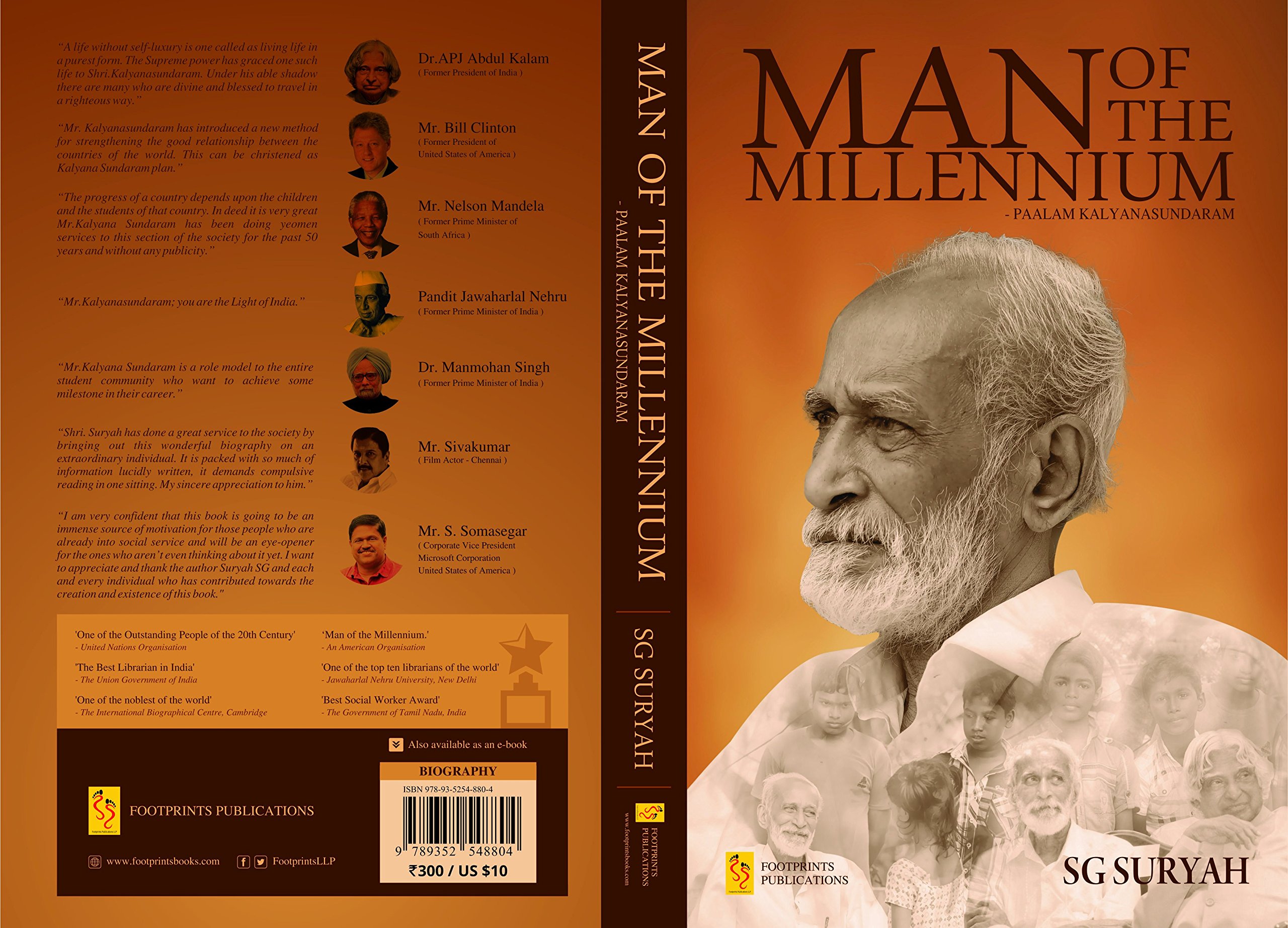 For 45 years, Kalyanasundaram’s social work focussed on children. However, in 1998, after retirement, he decided to expand his service and, thus, Paalam was born. One of the first things he did was to direct the money he received as retirement benefit to social cause.

Paalam serves as the link between donors and beneficiaries. Assistance is not only monetary. Children are helped in pursuing education, medical attention is provided to the needy, blood donation camps are organised and blood samples are reached to hospitals during emergencies, the unemployed, elderly, sick and handicapped are rehabilitated, and free counselling is provided.

“We cannot sustain ourselves, unless we contribute to the society in some way or the other. I strongly feel if even one person does his bit towards social good, there will be some change.” – – P. kalyanasundaram

Kalyanasundaram conveys a strong message to the world not to let the materialistic things affect your soul in being kind to others. If a common man with no special skills, and without a halo around him, can make efforts in bringing smile on little children, what are we waiting for? It is no doubt that not everyone is as selfless and a guardian angel like Kalyanasundaram; however, we can at least begin to make efforts. There are many people desperate for a touch and a simple hug of kindness. Let’s begin today!

Look what Henna crowns do for cancer survivors

Watch this Spectacular ice-skating duo dance to the tune of Indian Film music!

Watch one of the most mind-boggling tricks in recent times!

Culture Suren Rao - September 28, 2017
Nobu Hanaoka was only eight months old when the US dropped ‘Fat Man’ -- a Plutonium bomb -- on the Japanese city of Nagasaki...

Look what Henna crowns do for cancer survivors

Culture Suren Rao - September 26, 2017
Henna tattooing has been in practice for thousands of years, and is traditionally used for special occasions like holidays, birthdays and weddings in Africa,...

Watch this Spectacular ice-skating duo dance to the tune of Indian Film music!

Art Suren Rao - September 25, 2017
Meryl Davis and Charlie White have been ice-skating together since they were nine. Winning accolades at home and abroad, the 22-year-old skaters, both undergraduates at...

Does the Indian Taxi stand a chance in this race against...

Man And Dog Bonding Will Move You To Tears!

Meet Lakshmi, The Elephant Whose Musical Performance Will Wow You

These Talented Cats Were Born To Dance